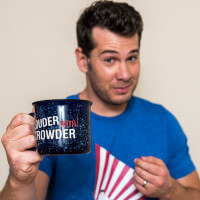 No further explanation was given. No specific tweets were highlighted as being in violation. No tweets were removed by Twitter. The only communication from Twitter was that the account would be suspended for twelve hours.

Additionally, Twitter continually changed the timeline regarding the suspension:

As of 4:02 p.m. on March 9, Twitter said the account would be fully restored in five hours and forty-two minutes. On March 10 at 5:10 a.m., the time until Crowder’s Twitter account was to be restored INCREASED to six days and nine hours. Again, no specific tweets were mentioned that broke any of Twitter’s guidelines.

Twitter suspended Crowder about two weeks prior after he tweeted proof of voter fraud.